The Buckingham SmartSteer® Advanced Dolly System has revolutionized the moving of heavy loads within the structural moving, rigging, and manufacturing industries. The SmartSteer® System links multiple Power Units and Dollies, allowing you to configure for the exact weight, size, and type of structure or equipment that you need to move. It is adaptable for every job site, no matter how cramped, large, or difficult to access, bringing you maximum efficiency and cost savings in equipment. 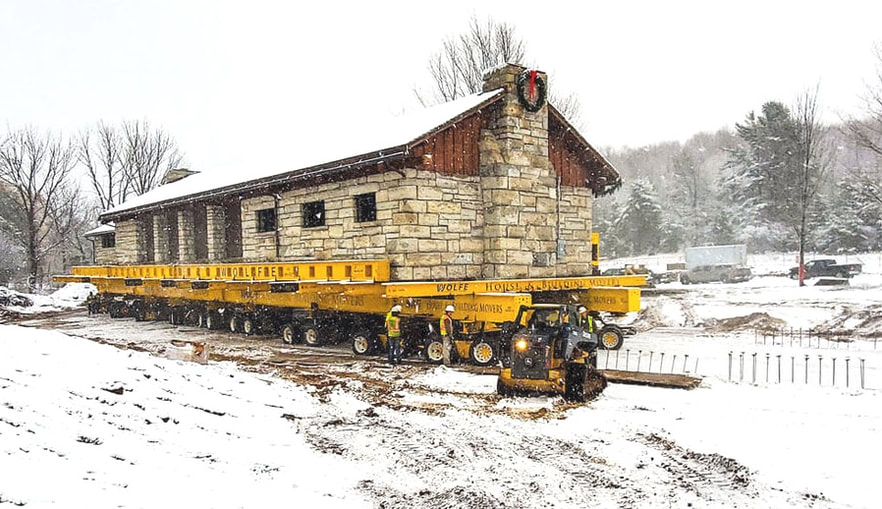 The SmartSteer® touch-screen tablet uses Bluetooth® technology to communicate with the Smartsteer® Module on the Power Units, which in turn controls the individual Dollies. Each Dolly is then automatically steered relative to its position on the load. The SmartSteer® System eliminates the need for tie bars and come-longs for steering, and the Dollies can operate quickly and efficiently in reverse as well as in forward mode.

For the first time ever, dolly steering can be accomplished in both forward AND reverse.

TO SET UP THE SYSTEM
The SmartSteer® touch-screen tablet controls up to nine dollies per BU-173 or BU-125 Power Unit, and multiple power units may be linked together to further expand the system. Setup begins by linking the Power Unit(s) and Dollies to the SmartSteer tablet via Bluetooth. The location of each dolly is entered in X/Y coordinates of actual feet from a starting position located at the left front corner of the load. As each dolly position is entered, it is shown graphically on the screen laid out according to its actual position.
TO OPERATE THE SYSTEM
In SmartSteer® mode, FrontSteer and RearSteer is adjusted with on-screen buttons and updated on the move as needed. Other steering modes are Articulated Mode, which provides automatic Rear Steering, and Crab Mode, where all dollies are steered equally. As each Dolly is automatically steered, its graphical depiction is continually updated on the screen. If an individual Dolly is not zeroed out in setup and begins tracking out of alignment, it can be easily corrected by adjusting its frame offset left or right. 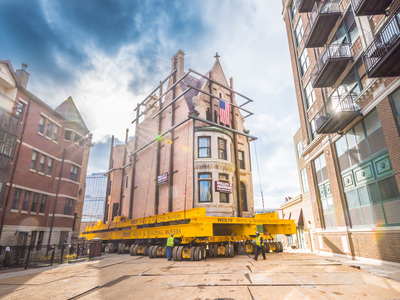 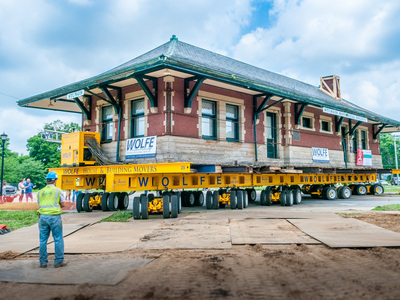 STURGIS, MI | A 304-TON MASONRY RAILROAD DEPOT IS MOVED WITH THE SMARTSTEER® SYSTEM 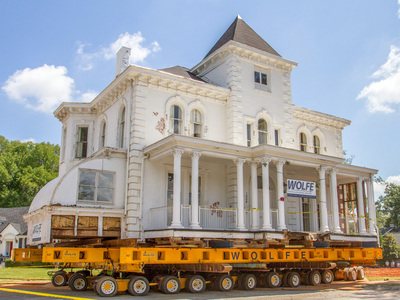 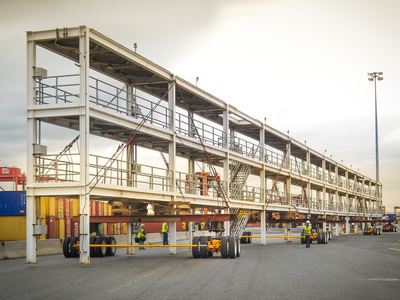